We acknowledge the Traditional Owners of the land where we work and live. We pay our respects to Elders past, present and emerging. We celebrate the stories, culture and traditions of Aboriginal and Torres Strait Islander Elders of all communities who also work and live on this land.

Searching for the Wizard of Oz

Searching for the Wizard of Oz is an AR scavenger hunt that takes place across the inner city streets of Adelaide.

Searching for the Wizard
of Oz 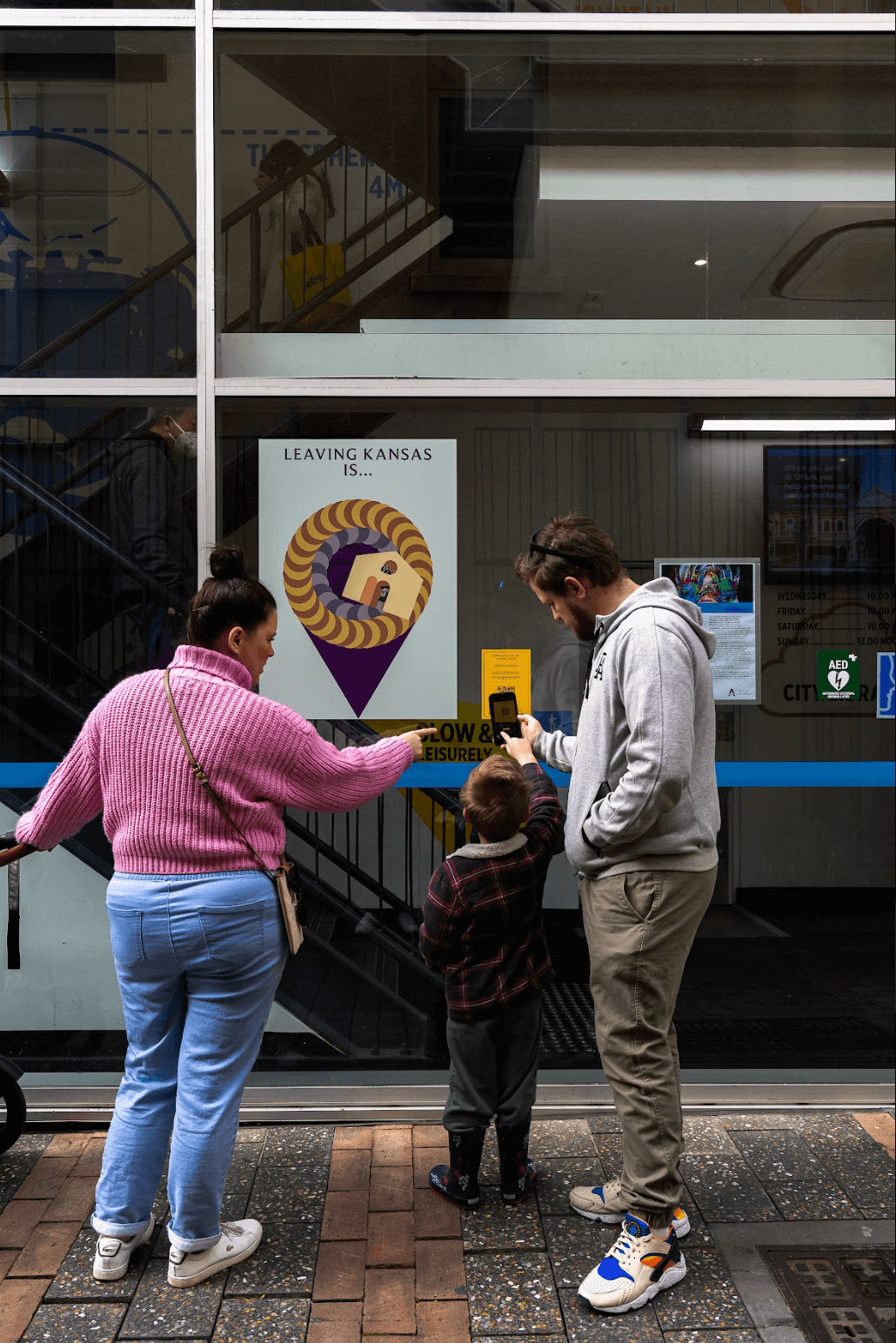 Searching for the Wizard of Oz is an AR scavenger hunt that takes place across the inner city streets of Adelaide.

There are six large paste-up posters throughout the
CBD that users are tasked with finding. 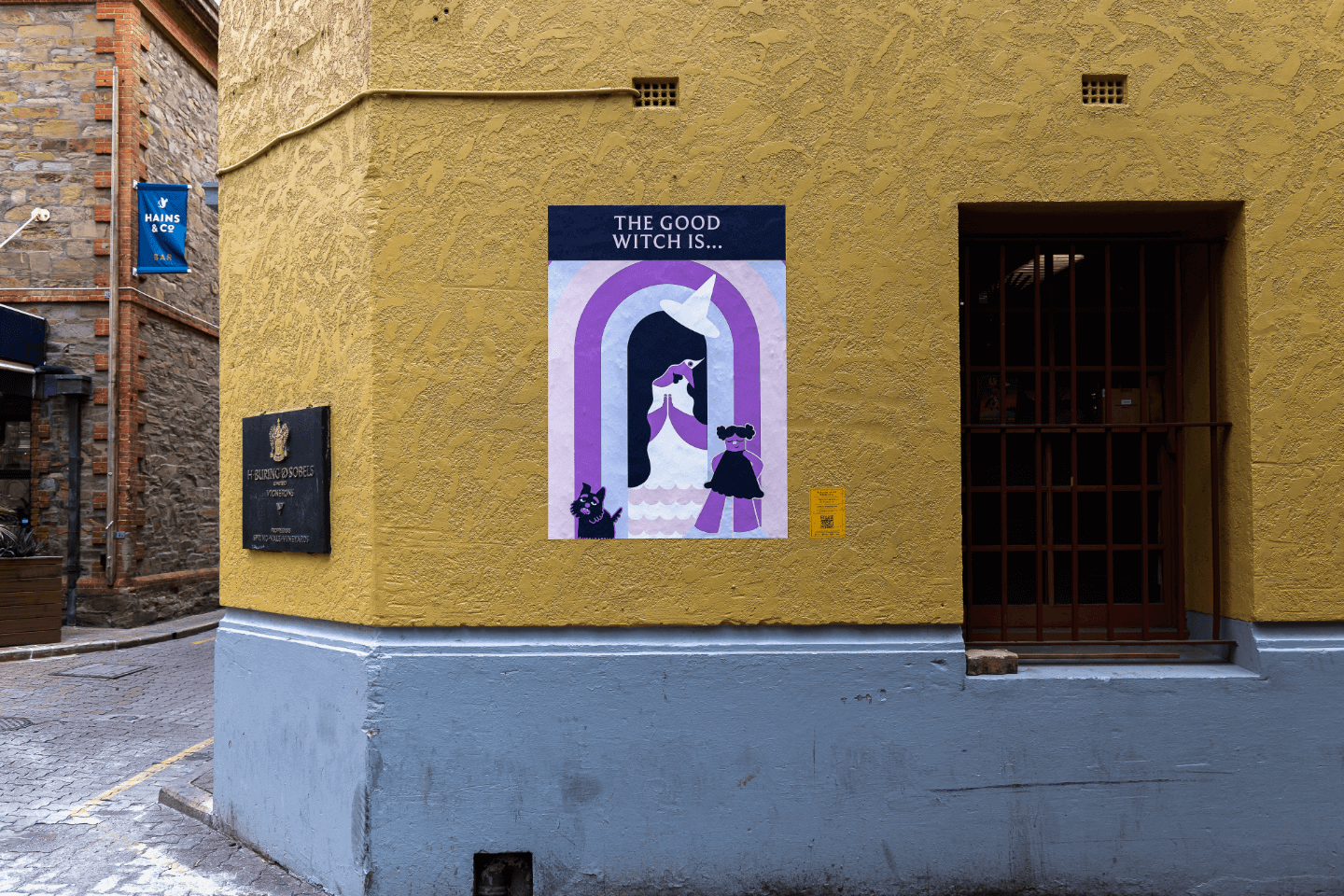 When they find them, they hold their phone up to ‘scan’ them and the phone screen brings the poster to life, telling a piece of the iconic story using beautiful 2D animation by Chris Edser. 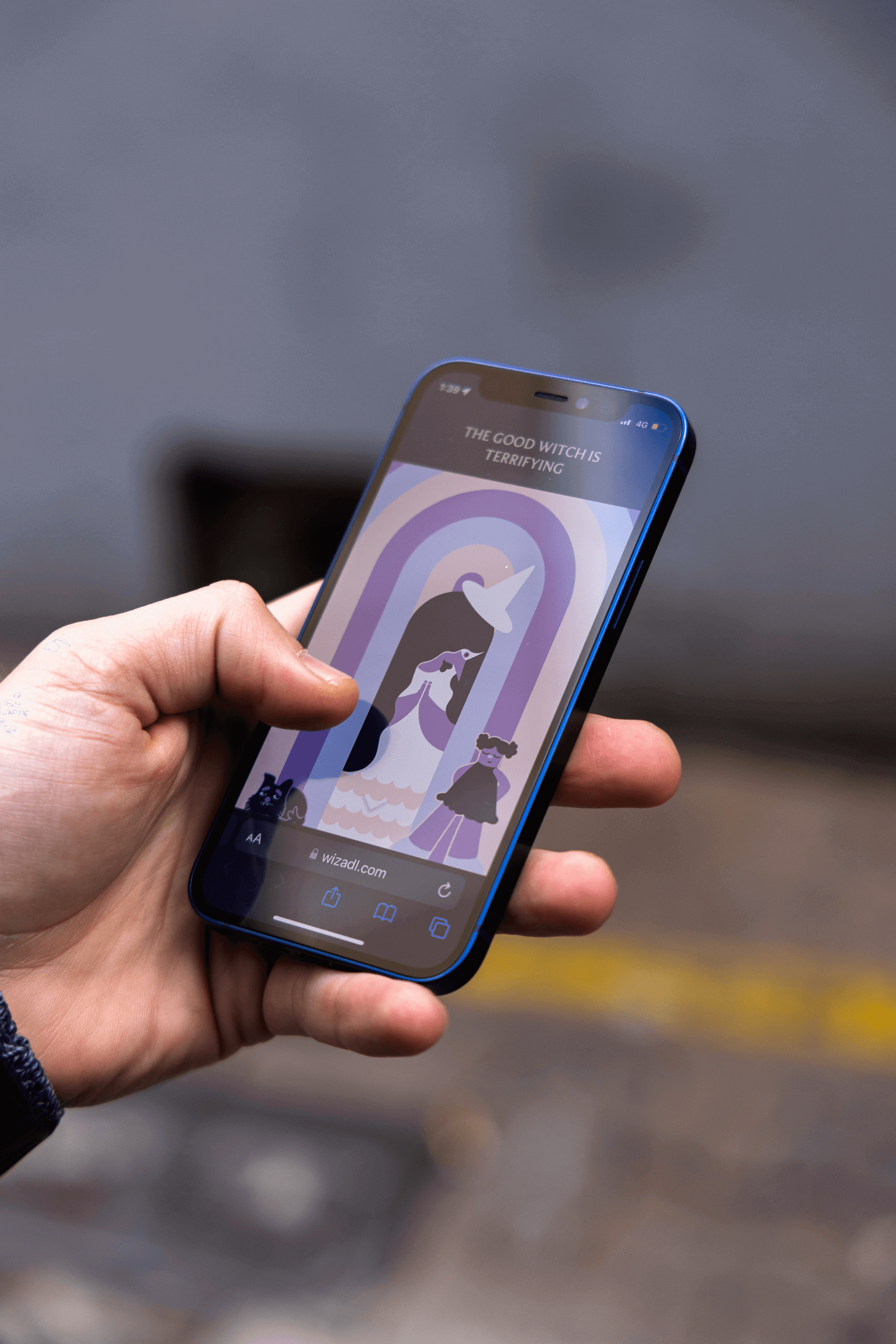 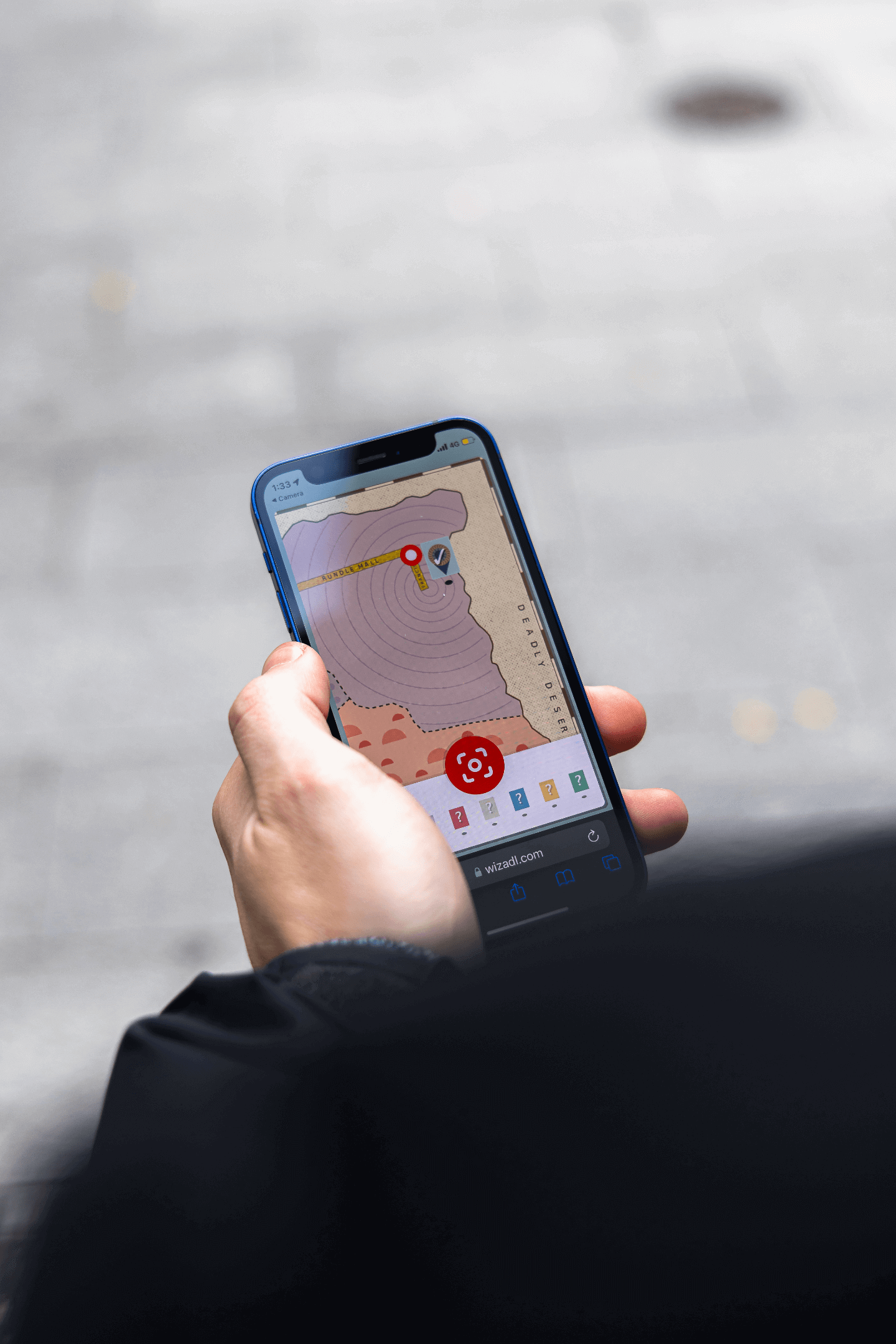 When users have found all six posters they are given
the location of
the Wizard. 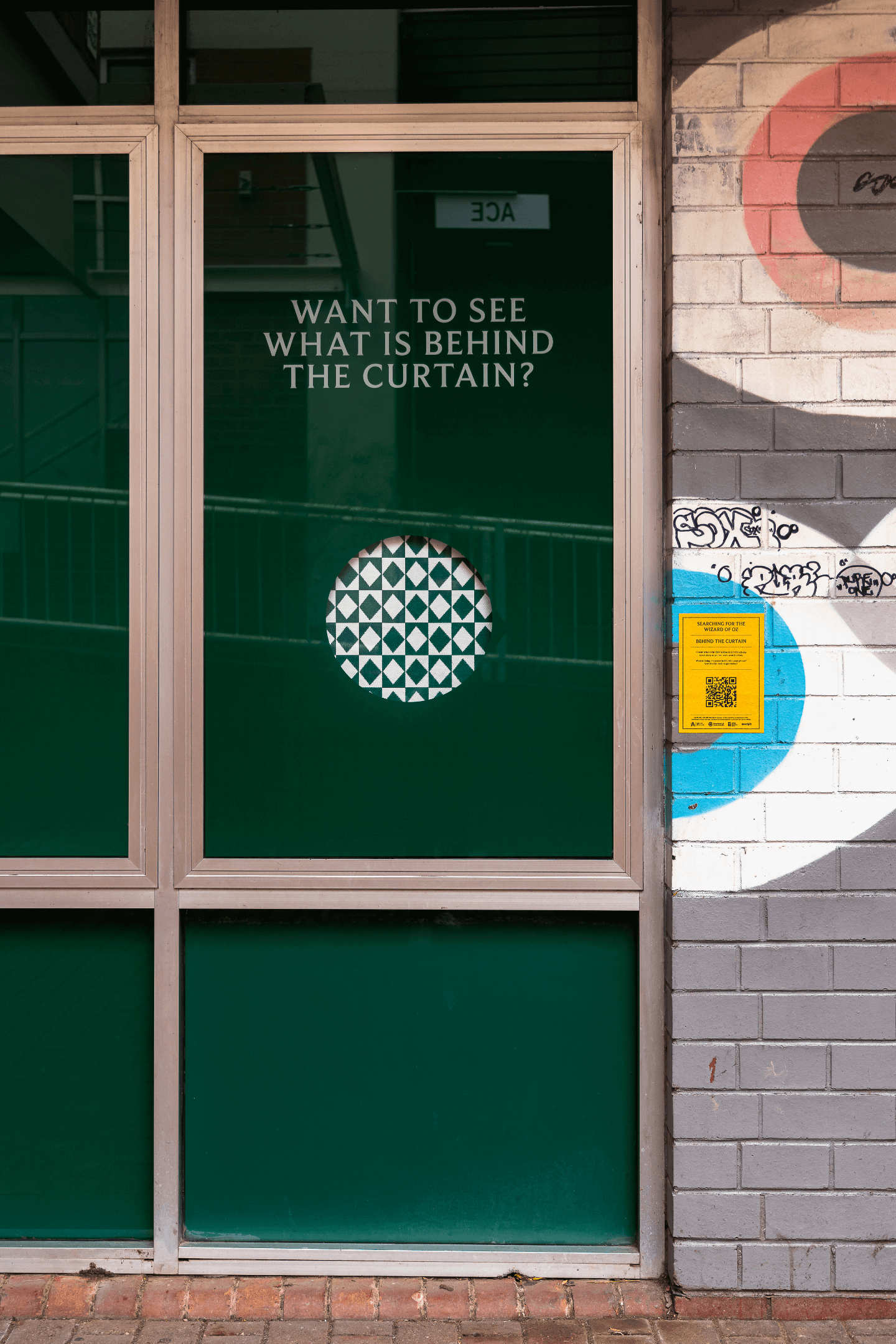 The Wizard is a final dramatic animation
revealed behind a miniature curtain.

Searching for the Wizard of Oz (SWO) was commissioned by City of Adelaide as part of ‘Adelaide Unleashed’, a series of activations designed to help recover from the effects of the pandemic by bringing more foot traffic into the CBD. 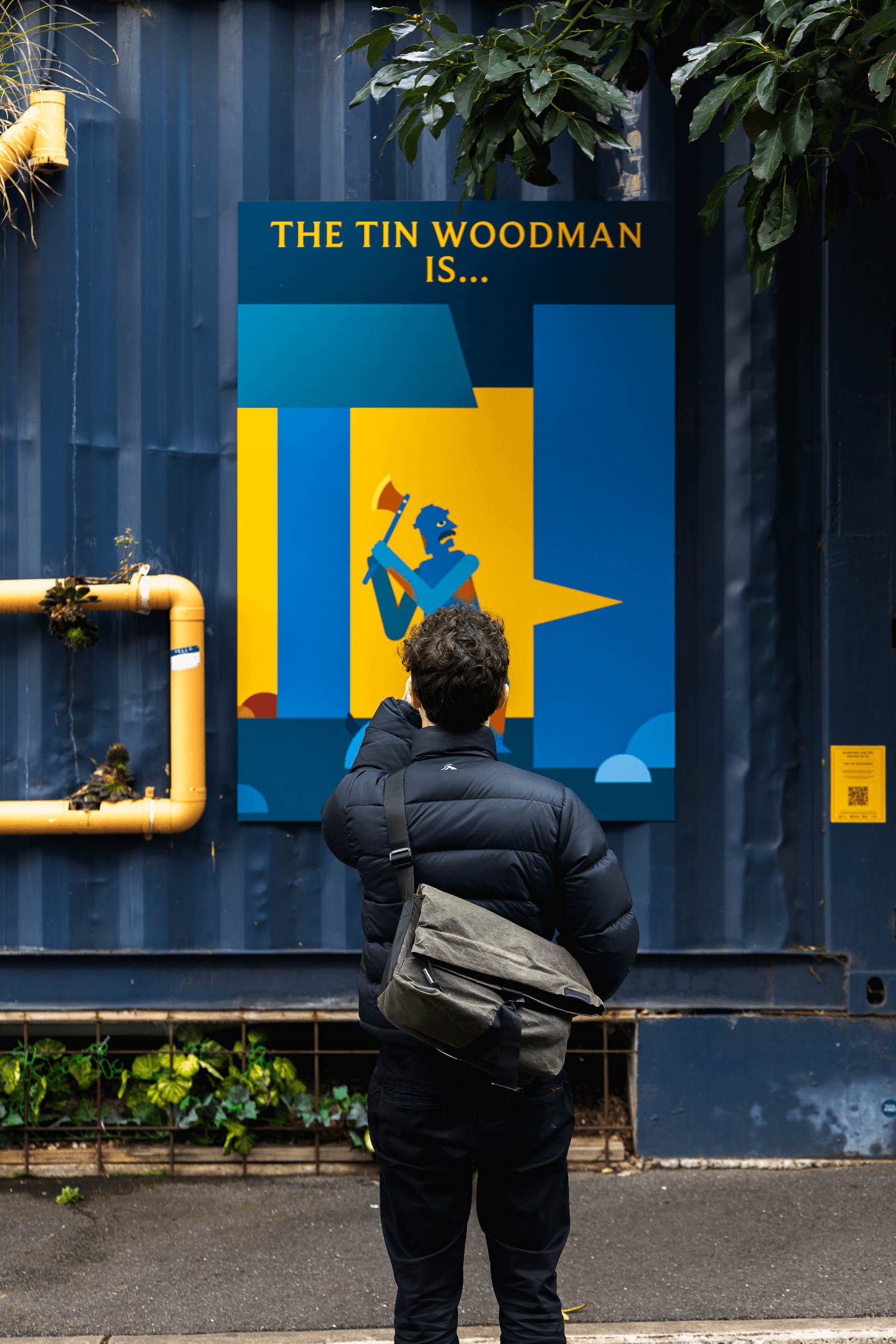 SWO was highly successful, bringing in a total of 2,747 people and generating 674.55 hours of people walking through the city that otherwise wouldn’t have had a reason to come.

Sandpit teamed up with Windmill Theatre Co to create an interactive website and learning resource to support ‘Rella’ a theatrical reimagining of Cinderella.

Sandpit teamed up with Windmill Theatre Co to create an interactive website and learning resource to support ‘Rella’ a theatrical reimagining of Cinderella. 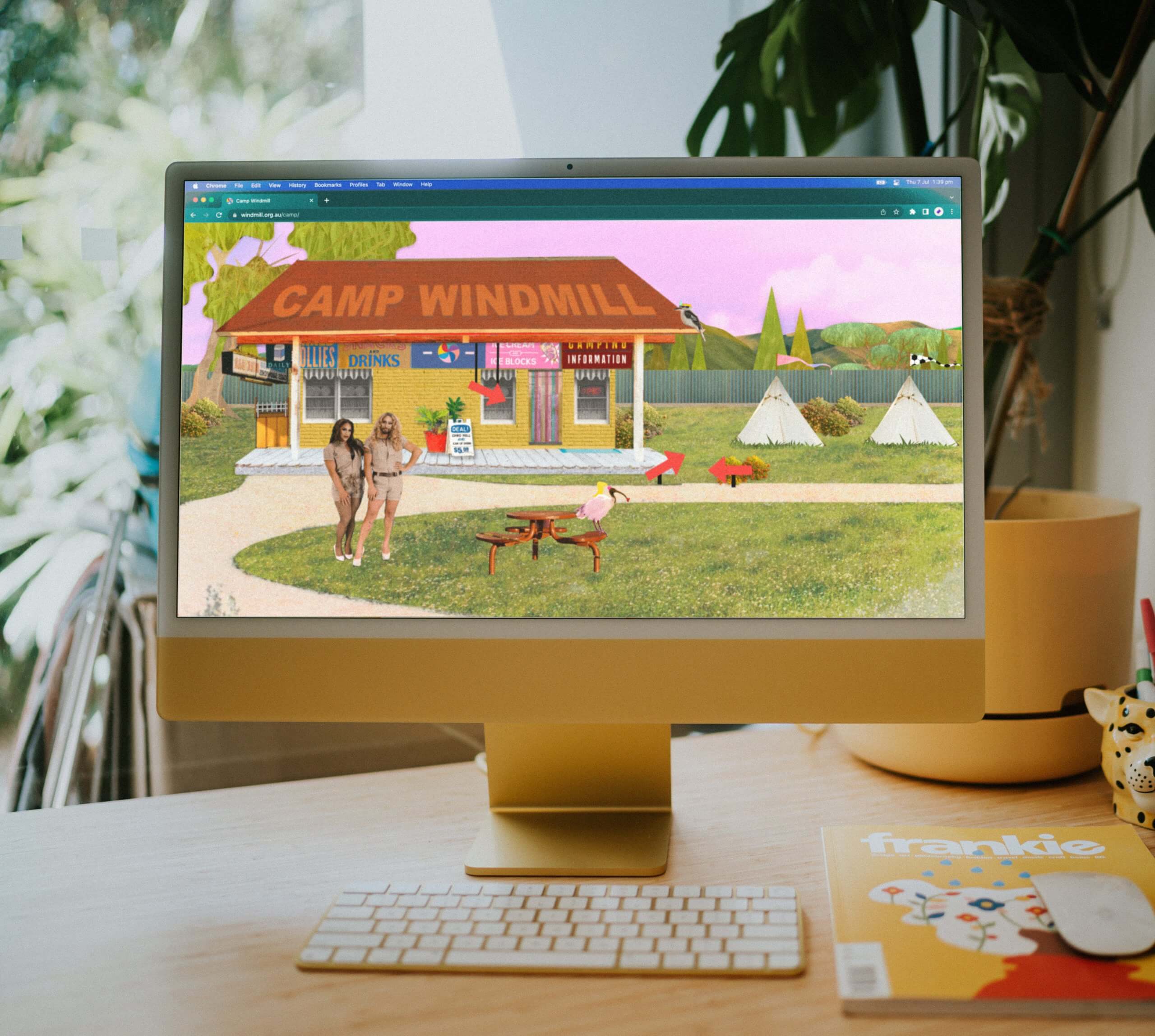 Windmill approached Sandpit to design and build a playful website that would help young people explore the contribution of ‘camp’ to the Australian performance canon. They wanted something that would help students and teachers alike dive deeper into the ideas presented in ‘Rella’ and open up conversations in classrooms about what ‘camp’ is. Camp Windmill leads users through camp’s complex, playful and sometimes contradictory meanings in a colourful and accessible way. 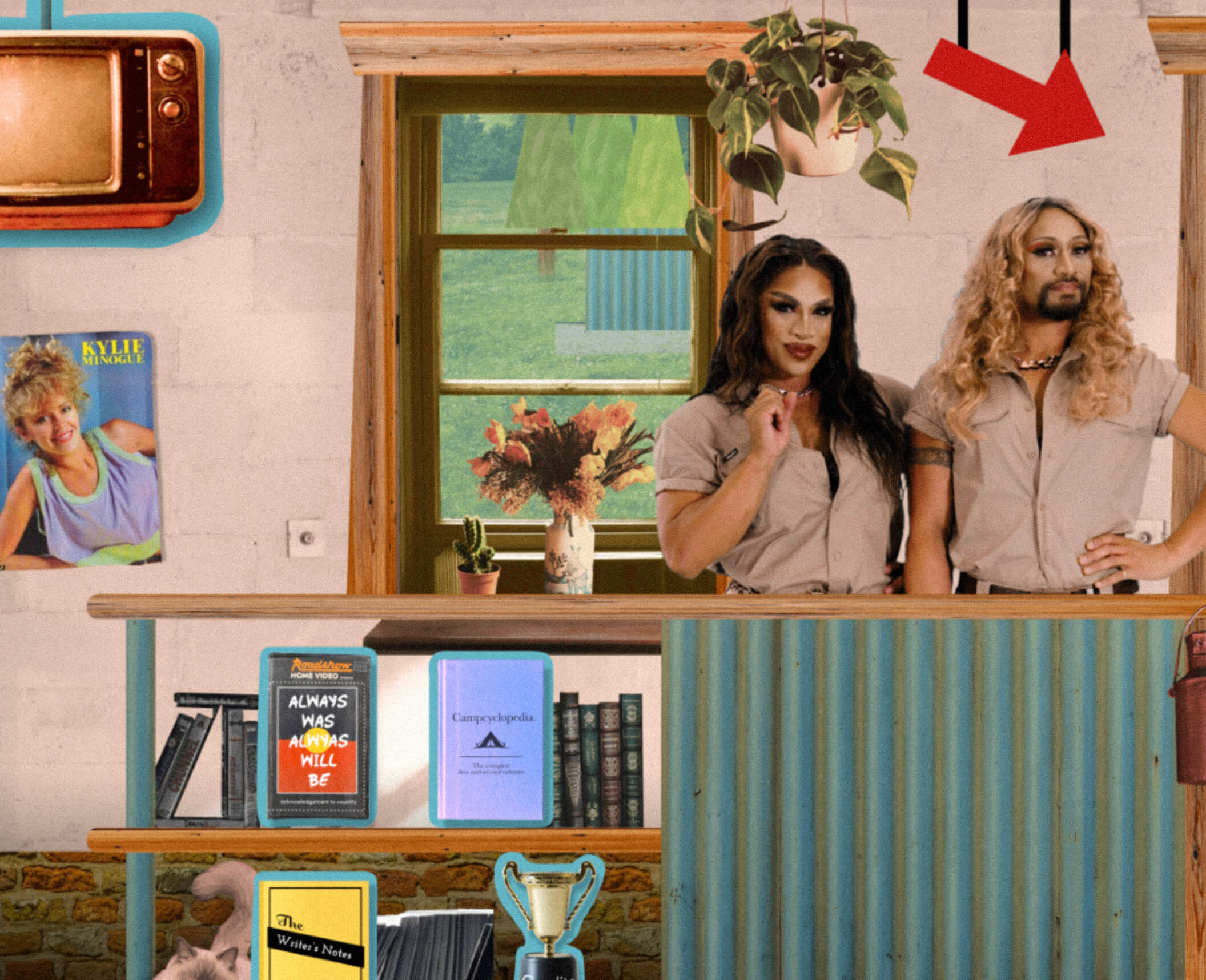 ‘Rella’ starred and was co-created by drag queens and performers Thomas Fonua and Fez Faanana. In the website, they play your Camp Windmill guides, there to answer any questions and make you laugh along the way. It was important when creating Camp Windmill to make sure that the form reflected the content and that nothing ever felt too serious or laboured. The resulting design is playful, surprising, and very very camp. 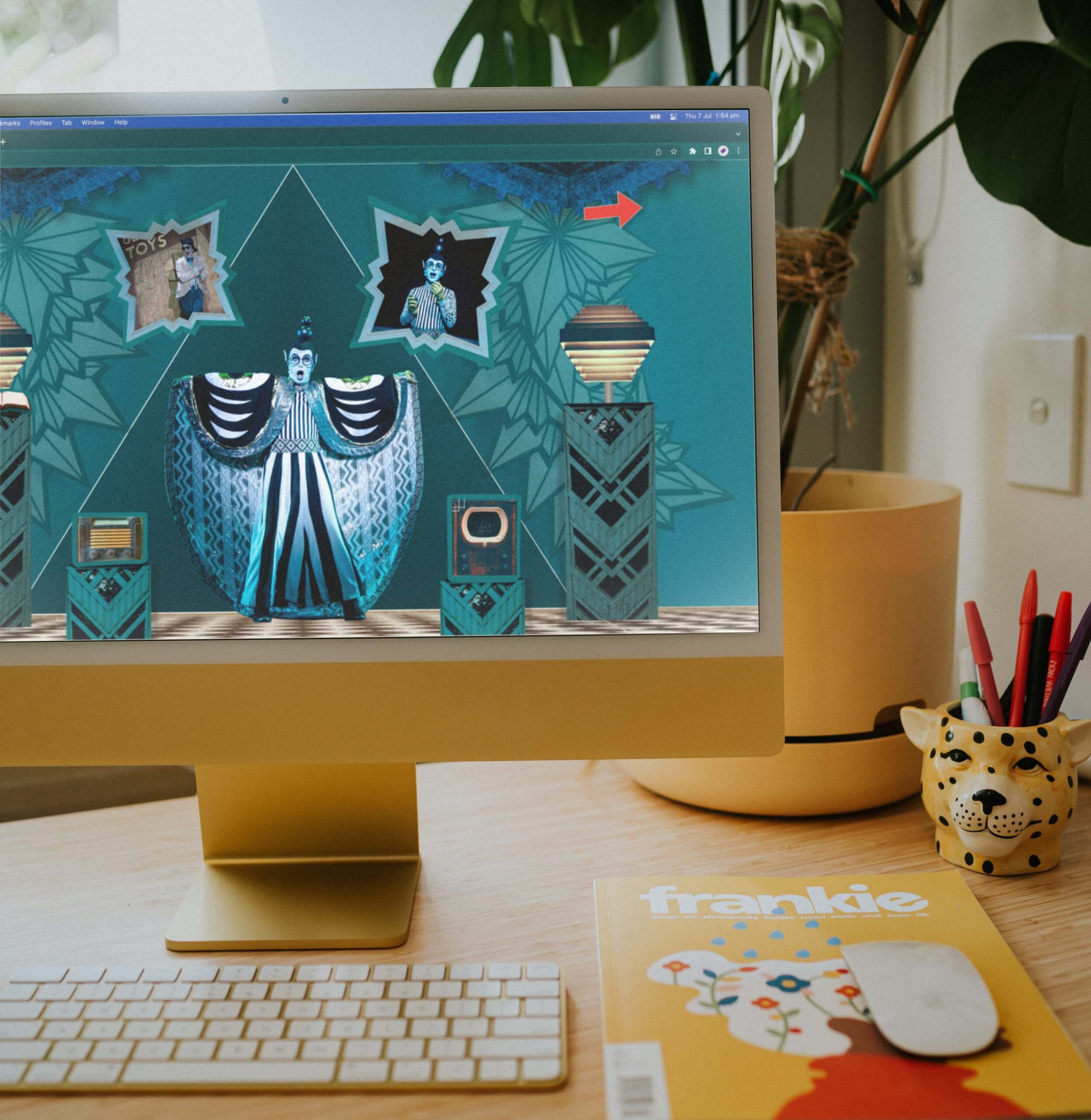 The structure of the website is playfully inspired by the phrase ‘camp as a row of tents’. It begins at a central kiosk with Thomas and Fez, and then opens up to series of tents. Users can go into the tents to visit a resident ‘camper’ and hear all about what camp means to them. The ‘campers’ include stage icons such as Paul Capsis, Glace Chase, and Windmill’s own Rosemary Myers.

What new forms of art and performance are possible if we use Augmented Reality (AR) technology to create invisible spheres of sound?

What new forms of art and performance are possible if we use Augmented Reality (AR) technology to create invisible spheres of sound? Sandpit collaborated with Google Creative Lab for three unique artistic experiments with location-based audio technology.

The Sounds in Space app by Google Creative Lab creates an invisible audio layer over the real world. This means that sounds are inaudible until the user – holding their device and wearing headphones – walks into the specific physical space where the sound is triggered by their device’s location.

Sounds in Space was made in collaboration with – and for – artists, musicians, curators and choreographers of all kinds. Sandpit collaborated with a range of multidisciplinary artists and organisations, including State Library Victoria (SLV) and the Australian Chamber Orchestra.

Google Creative Lab and Sandpit brought together four independent artists – Mayu Muto, Thomas E Kelly, Glen Walton and Zoe Coombs-Marr – to explore how they might use this technology in their own unique artform practices.

With State Library Victoria, we experimented with a new kind of dynamic audio experience. Visitors could wander through SLV’s gallery with their headphones and devices, listening to a curatorial narrative that responded to where they travelled and how long they engaged with specific items in the SLV collection.

Invisible Orchestra was a thrilling sound installation in which audiences navigated their way through an abstract space inspired by the solar system. With their vision partly obscured, audiences experienced the attracting and repelling forces of space through original soundscapes composed by Richard Tognetti and Joseph Nizeti.

Can we create interactive versions of famous Aboriginal artworks to help more people understand the stories behind the images?

Can we create interactive versions of famous Aboriginal artworks to help more people understand the stories behind the images?

The Yuendumu Doors, painted by five Warlpiri artists, depict Dreaming stories. The doors were originally painted for classrooms at the local school in Yuendumu in the 1980s and are now precious items in the South Australian Museum collection.

Sandpit worked with SA Museum and Yuendumu artists to create digital versions of these artworks. Visitors can use their smartphones as cursors on projected images of the Yuendumu doors, selecting and exploring specific aspects of each image. Rich content appears in the palm of the visitor’s hand.

Project Ludwig was an interactive event where the audience collectively programmed their own classical music performance, selecting from an array of movements from Beethoven’s Opus 18 works to be performed by the Australian String Quartet.

Project Ludwig was an interactive event where the audience collectively programmed their own classical music performance, selecting from an array of movements from Beethoven’s Opus 18 works to be performed by the Australian String Quartet. Each performance culminated in a unique, one-night-only Beethoven quartet experience.

Prior to the performance, audience members had 30 minutes in the foyer to vote for which four movements would be played that evening. Cards of ‘sheet music’ – each describing a movement option and its mood, and each fitted with hidden Near Field Communication (NFC) tags – were laid out for audience members to explore their options.

To vote, people placed their chosen sheet music on magical music stands, which triggered a violin to play excerpts of their selections.

Can we use Artificial Intelligence to explore how fictional characters might respond to real-world environments?

Can we use Artificial Intelligence to explore how fictional characters might respond to real-world environments?

Telescope is an experimental AI Machine learning tool for writers, developed by Sandpit in collaboration with Google’s Creative Lab in Sydney.

Telescope allows writers to take a character ‘out for a walk’ in the real world and generate new ideas.

First, the writer describes their character in a Google Docs Add-on. Then, the writer heads outside onto the street with their phone and their headphones. As they walk, a mobile app synthesises maps data and info from the phone’s camera.

The app then begins a sort of ‘stream of consciousness’ audio – using text-to-speech functions – combining the character’s qualities with inspiration from the writer’s immediate surroundings. The results can be poignant, banal, surprising and often hilarious.

The Arts Centre asked us: How can we show off the little-known underground nooks and crannies of our building?

The Arts Centre asked us: How can we show off the little-known underground nooks and crannies of our building? The Story of Lamp was an interactive adventure for kids and adults through the Arts Centre’s labyrinthine corridors.

The adventure began at a humble lamp located next to an armchair in the public foyer. Each visitor received a magical book, designed by Nick Lewis. When the visitor touched their book to the lamp’s base, The Story of Lamp came to life.

Voiced by actor Tilda Cobham-Hervey, Lamp whispered to the visitor, asking them to lean in and hear her real voice for the first time. Lamp then directed visitors on a journey through the corridors. As Lamp spoke, the intensity of her light flickered in step with the pace and drama of her story.

Penguin Books Australia asked us: How can we create intimate connections between our authors and readers?

Penguin Books Australia asked us: How can we create intimate connections between our authors and readers?

We created Dial-A-Story, an interactive storytelling experience inside an old-fashioned phone booth branded with the iconic Penguin logo. The first booth was located at Melbourne’s Library at the Dock.

Pick up the phone and dial the number of one of five beloved Penguin Australia writers – John Safran, Jamie Durie, Graeme Base, Father Bob Maguire or Maggie Beer. You’ll hear an original story from the author. Plus, you’ll be invited to leave a message of your own.

Ghost , Toast and The Things Unsaid

What if we could hear characters’ unspoken thoughts in a theatre performance?

Ghosts, Toasts and the Things Unsaid

What if we could hear characters’ unspoken thoughts in a theatre performance?

We worked with Google’s Creative Lab in Sydney to create Ghosts, Toast and the Things Unsaid, an intimate digital theatre experience.

The performance, which premiered at the 2016 Adelaide Fringe Festival, featured mobile audio technology, allowing audience members to ‘tune in’ to the inner thoughts of two characters, Maude and Steve. Audience members inhabited the ghosts of the characters, and watched the action unfold in ghost costumes on a 360º set.

The result was a mix of live action (spoken by the actors on stage) and inner monologue (pre-records by the actors delivered through tiny speakers in the ghost costumes), provoking the audience to reflect on unspoken desires and resentments in relationships.